The French originally settled upon a traditional Mississaugas First Nation site called Katerokwi (Cataraqui in the common transliteration, and according to French pronunciation rules should be said “kah-tah-RAH-kee,” although it is generally pronounced “kah-tah-ROCK-way”) in 1673 and established Fort Cataraqui, later to be called Fort Frontenac. The fort was captured and destroyed by the British in the Battle of Fort Frontenac during the Seven Years’ War in 1758. A receiving centre for fleeing refugees from the American Revolution some years later, Kingston became the primary community of southeastern Upper Canada.

United Empire Loyalists formed a significant part of an expanding population in the area at the end of the 18th century. Loyalists who had originally sought refuge at Carleton Island during the Revolutionary War arrived at Cataraqui after the area was surveyed in 1783. One of these Loyalists was Molly Brant (the sister of Six Nations Leader Joseph Brant). A large group of Loyalists led by Captain Michael Grass arrived in 1784, having sailed from New York and up the St. Lawrence River. Fort Frontenac was restored to accommodate a military garrison that would defend the new community.

Cataraqui was referred to as “the King’s Town” or “King’s Town” by 1787 in honour of King George III. The name was shortened to “Kingston” in 1788. 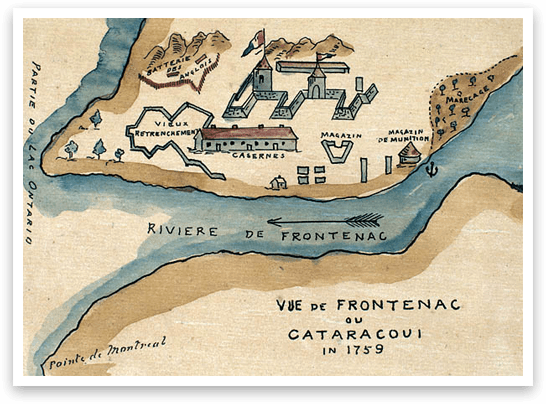 During the War of 1812, Kingston was the base for the Lake Ontario division of the Great Lakes British naval fleet which engaged in a vigorous arms race with the American fleet based at Sackett’s Harbor, New York for control of Lake Ontario. After the war, Britain built Fort Henry and a series of distinctive Martello towers to guard the entrance to the Rideau Canal. All still exist, and Fort Henry is a popular tourist attraction. In 2007, the Rideau Canal and the fortifications at Kingston were designated a UNESCO World Heritage Site.

Kingston’s location at the Rideau Canal entrance to Lake Ontario, after canal construction was completed in 1832, made it the primary military and economic centre of Upper Canada. Incorporated as a town in 1838, the first mayor of Kingston was Thomas Kirkpatrick. Kingston had the largest population of any centre in Upper Canada until the 1840s. Kingston was incorporated as a city in 1846.

Kingston was chosen as the first capital of the united Canadas and served in that role from 1841 to 1844. The first meeting of the Parliament of the United Canadas on June 13, 1841 was held on the site of what is now Kingston General Hospital. The city was considered too small and lacking in amenities, however, and its location made it vulnerable to American attack. Consequently, the capital was moved to alternating locations in Montreal and Toronto, and then later to Ottawa in 1857. Subsequently, Kingston’s growth slowed considerably and its national importance declined.

Kingston was the home of Canada’s first Prime Minister, Sir John A. Macdonald. One of his residences in Kingston, Bellevue House, is now a popular National Historic Site open to the public and depicting the house as it would have been in the 1840s when he lived there.

During the late nineteenth and early twentieth centuries, Kingston remained an important Great Lakes port and a centre for shipbuilding and locomotive manufacturing, including the Canadian Locomotive Company, at one time the largest locomotive works in the British Empire. Most heavy industry has now left the city, and employment is now primarily in the institutional, military, and service/retail sectors.

Kingston grew moderately through the 20th century through a series of annexations of lands in adjacent Kingston Township, including a 1952 annexation of some 5,500 acres (22 km2) which encompassed areas west to the Little Cataraqui Creek (including the village of Portsmouth), where a number of large residential subdivisions were built in the late 1950s and early ’60s.

Municipal governance had been a topic of discussion since the mid-1970s due to financial imbalance between the city and the surrounding townships, which now had large residential areas and a population approaching that of the city proper. On January 1, 1998, the City was amalgamated with Kingston Township and Pittsburgh Township to form a new City of Kingston. The city’s boundaries now encompass large rural areas north of Highway 401 and east of the Cataraqui River.

The term “Cataraqui”, from the original native name for Kingston, today refers to an area around the intersection of Princess Street and Sydenham Road where a village that later took the name was located. Cataraqui is also the name of a municipal electoral district. 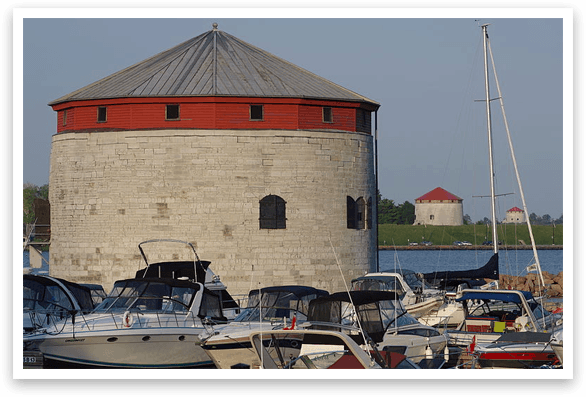 Kingston, being strategically located at the head of the St. Lawrence River and at the mouth of the Cataraqui River near the border with the United States, has been a site of military importance since Fort Frontenac was built in 1673. The French, and later, the British established military garrisons. Several defensive fortifications were constructed in the 1800s, including Fort Henry, four martello towers, and the Market Battery. Military ships were built at the Kingston Royal Naval Dockyard at Point Frederick from 1788 to 1853.

Camp Barriefield, now McNaughton Barracks, was constructed at the beginning of the First World War and expanded during the Second World War. Camp Barriefield was named in honour of Rear-Admiral Sir Robert Barrie (May 5, 1774 – June 7, 1841), who was a British naval officer noted for his service in the War of 1812. It was later named McNaughton Barracks after Andrew George Latta McNaughton, a former minister of national defense. Vimy Barracks was established in 1937 for the Royal Canadian Corps of Signals (later the Royal Canadian School of Signals). A military aerodrome was constructed to the west of Kingston to support flying training during the Second World War.

Kingston’s military units and facilities are supported by Canadian Forces Base Kingston (CFB Kingston). Vimy and McNaughton Barracks, which are located east of Kingston’s downtown, today house the Canadian Forces School of Communications and Electronics (CFSCE), the Canadian Forces‘ military communications training centre and several other units. Other establishments include Fort Frontenac located on the site of the original fort, and the Royal Military College of Canada located on Point Frederick.

This page is referencing the Wikipedia article “Kingston, Ontario”.