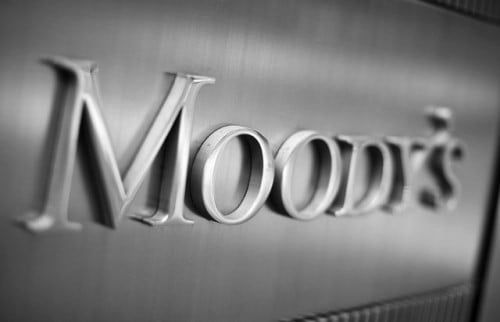 The ratings firm lowered the long-term debt and deposit ratings one level on Toronto-Dominion Bank, Bank of Montreal, Bank of Nova Scotia, Canadian Imperial Bank of Commerce, National Bank of Canada and Royal Bank of Canada Wednesday. The move left TD with a long-term debt rating of Aa2, the third-highest level. Moody’s lowered the other five to A1, the fifth-highest. The outlook is still negative on all six lenders.

The yield on Royal Bank of Canada’s U.S. dollar bond due January 2026 added nine basis points to 3.92 percent on Thursday, the steepest increase in almost two months, while the rate on Toronto-Dominion Bank’s note due in September 2031 rose five basis points, according to data compiled by Bloomberg. An index of Canadian bank shares fell 0.8 percent.

“It’s never a good thing when there’s a wide-scale downgrade within a country,” said Andrew Torres, founding partner and chief investment officer at Toronto-based Lawrence Park Asset Management. “Even though you can’t ignore the move Moody’s made overnight, I don’t think it’s the sign of an impending banking crisis in Canada.”

The downgrade of the Canadian banks follows a recent run on deposits at alternative mortgage lender Home Capital Group Inc. that has sparked concern over a broader slowdown in the nation’s real estate market as Canadians are taking on higher levels of household debt. The firm’s struggles have taken a toll on Canada’s biggest financial institutions, which have seen stocks slide on concern about contagion.

The downgrade adds to other negative factors weighing on the loonie such as concerns over U.S. trade protectionism and lower oil prices, said Vassili Serebriakov, a New York-based foreign-exchange strategist at Credit Agricole SA. He expects the Canadian dollar to slip further to 1.40 per the greenback in the third quarter.

“We are not heading for a major housing bust I believe, but these concerns are not going away,” he said.

In its statement, Moody’s pointed to ballooning private-sector debt that amounted to 185 percent of Canada’s gross domestic product at the end of last year. House prices have climbed despite efforts by policymakers to cool the market, it said Wednesday. Prices in Toronto and Vancouver have soared on the backs of strong economies, limited supply and foreign demand that’s sparking some speculative buying in the two markets. Toronto prices jumped 25 percent in April from the year earlier.

“Expanding levels of private-sector debt could weaken asset quality in the future,” David Beattie, a Moody’s senior vice president, said in the statement. “Continued growth in Canadian consumer debt and elevated housing prices leaves consumers, and Canadian banks, more vulnerable to downside risks facing the Canadian economy than in the past.”

Home prices in Toronto and the surrounding cities are gaining at a 30 percent annual pace, prompting provincial leaders to impose a foreign buyers tax and other measures last month to cool what they called dangerous speculation.

Canadian household debt climbed to a record relative to disposable income in the fourth quarter, another sign of strain from a long housing boom. Credit-market debt such as mortgages increased to 167.3 percent of after-tax income in the October-to-December period from 166.8 percent in the prior three months. Still, Canada’s consumer confidence is at the highest since at least 2009.

“There’s a lot of debt in the developed world overall, Canada is not a particular place where things have gone crazy and people are up to their ears in debt more than anywhere else,” said Steve Belisle, portfolio manager with Manulife Asset Management in Montreal, who oversees about C$3 billion including bank stocks. “Debt is a problem for the developed world globally, not for Canada specifically.”

Spokesmen for the six banks declined to comment on the Moody’s downgrade.

“We do note that the Canadian banks maintain strong buffers in terms of capital and liquidity,” Moody’s said in its statement Wednesday. “However, the resilience of household balance sheets, and consequently bank portfolios, to a serious economic downturn has not been tested at these levels of private sector indebtedness.”

Moody’s also cited high housing prices and consumer debt when it cut five of the banks in January of 2013. That decision cost Toronto-Dominion its Aaa grade.

“Canadians can continue to be confident in their banks, and in their financial sector which is sound and well capitalized, and has proven its resilience time and time again including the 2008 financial crisis,” Annie Donolo, a spokeswoman for Canada Finance Minister Bill Morneau, said in an emailed statement. “Canada’s big six banks have strong capital and liquidity, supported by their reliable profitability, and have consistently generated returns above the global average. Canada has a strong regulatory framework in place for oversight of federally regulated financial institutions.”

The downgrades aren’t likely to have a big impact on bond prices, according to RBC Capital Markets. Toronto-Dominion Bank’s widely traded March 2022 deposit note has a yield spread of about 75.9 basis points over government debt.

“The banks are 50 percent of the bond market. Do you think guys are going to wake up and sell them today?” Mark Wisniewski, a credit hedge-fund manager for Sprott Asset Management LP, said by phone from Toronto. “What are they going to buy?”

Are you interested in learning more about buying your next home, or want to know more about the best mortgages; contact me today!